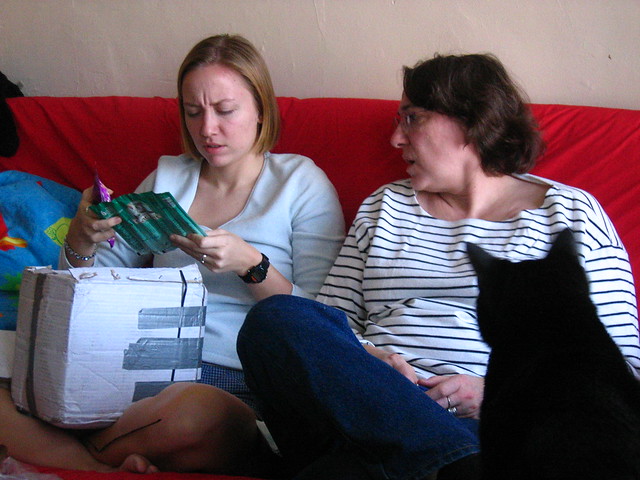 Uncle Neal insisted she come to the East Village for a visit. “You have to come, Tina. You just have to.”

Tina held her breath and bugged her eyes out. “I can’t come today. I’m sorry.” She went down her mental checklist. There was so much still to do. And don’t forget to get some orange juice; Blair won’t drink anything else.

“When then?” Uncle Neal’s voice floated over the phone, his happiness dancing over the air.

She shook her head. She considered throwing the cell phone under a passing taxi, imagining the satisfying crunch.

The man could be so infuriating, and yet they both knew what she would do—and that made her all the more angry. With a deep breath, she caved in. “Sunday. I’ll be up in the afternoon.”

Wheels spun in her mind, manufacturing possibilities and ulterior motives. She could almost feel his smile.

This time, the sigh she let out came from her toes. “Yeah. Sure. Whatever.” Damn it, Uncle Neal. What have I agreed to?

“Oh! I almost forgot! I got you a present. I just know that you’ll love it.”

Tina could hear someone calling in the background over the line.

She stared at the screen on her cell. “See you. Bye,” she said to herself.

On Sunday, Tina took the subway into Manhattan. The more she thought about it, the angrier she got. If her mom wanted to see her, she should call her herself. Why play games? What could be wrong? Was she sick? If she needed a break from Uncle Neal, there were others who would help. Mom knew that, but Mom could be so freaking stubborn. Heck, her mom could come down to Brooklyn for once. Just once. Was it too much to ask? Really.

When she got to the brownstone, Tina rang the bell.

Pulling the door open, Tina headed up the worn stairs. Memories of a little girl in her school uniform came unbidden and unwanted.

Mom greeted Tina at the door with a big hug. In the apartment, Neal rocked back and forth to a frenetic beat only he heard.

Tina pulled back. “Seriously? You didn’t know I was coming?”

Her brow furrowed, Mom replied, “What? Of course not. It’s a pleasant surprise though.” Mom looked exhausted. The black cat, Simon, purred and rubbed against Tina’s leg.

Neal smiled like he’d eaten a goldfish. “I have a present!” he said. He bounced down the hall to his room.

Looking at her mom, Tina decided to let whatever this was just play out.

Her mom shrugged, confusion squirming on her face. What was Uncle Neal up to? Apparently, neither of them had a clue.

Uncle Neal returned with a cardboard box. The lid was taped on with duct tape.

Her uncle pulsed with enthusiasm. “Open it! Open it!”

Tina sat on the sofa and pried the package apart. The box was filled with coupons and free samples of various products. What was this?

“Do you like them?” Uncle Neal asked. He beamed with excitement. Like a kid on Christmas morning. Like the kid she had always known. The kid he would always be.

Tina tried to hide her shock and sinking disappointment. What did I expect? I should’ve known it would be something like this. “Ah, well, I’m certainly surprised.” She forced herself to smile. “You must have been saving all this … stuff … for a long time.”

He nodded and rubbed his hands together. “Yes! I just knew you would know what to do with them.” Pride shown in Uncle Neal’s broad smile, unfazed by the long prominent scar across his brow.

Tina felt tears forming in the corners of her eyes. She nodded.

Picture is copyright by Pete Jelliffe.